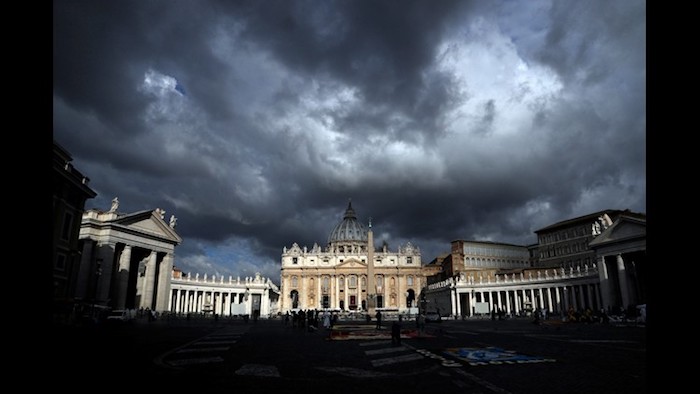 Pope Francis opens a monthlong meeting of bishops Wednesday on engaging young Catholics as his church is again under fire for the way it covered up for priests who raped and molested young people.

One American bishop suggested postponing or cancelling the synod, given the poor optics of assembling the church hierarchy to discuss a demographic harmed by the culture of concealment the same hierarchy has been accused of fostering.

A Dutch bishop, outraged that the Vatican hasn’t responded to claims that Francis himself rehabilitated a predator American cardinal, announced he was boycotting the meeting altogether. Another American bishop asked Francis to let him stay home to cope with the scandal’s fallout in his diocese.

Despite the dark cloud hanging over the synod, organizers said they thought the rebirth of the scandal could still give the Vatican an opportunity to show that the Catholic Church isn’t just about sex abuse and cover-ups.

“The church isn’t represented by those who make mistakes. The church is more important and fundamental than that,” said Cardinal Lorenzo Baldisseri, who is organizing the Oct. 3-28 meeting.

The synod is bringing together 266 bishops from five continents for talks on helping young people find their vocations in life – be it lay or religious – at a time when church marriages and religious vocations are plummeting in much of the West.

It’s a follow-on synod to the meetings Francis organized in 2014 and 2015 on family life that inspired his controversial opening to letting divorced and civilly remarried Catholics receive Communion.

No single pressing issue is facing bishops this time around, although the way they address homosexuality will be the most closely watched topic. The Vatican’s preparatory document made what is believed to be the first-ever reference in an official Vatican text to “LGBT.”

In addition, the role of women in the church will be watched, although no woman has any vote on the final document. Only a handful of women are attending as experts or as some of the 34 young people picked to attend – a structural imbalance in the Vatican’s synod process.

On the eve of the synod, a parallel conference got underway across town in Rome organized by Catholic women’s groups, which have long lobbied for a greater say in church decision-making.

Students from the Ursuline High School in Wimbledon, Britain opened the conference by reading the letter they wrote to Francis complaining about the prejudice they feel as young women in the church. They even criticized Francis’ frequent use of the term “feminine genius” to describe the qualities he says are so necessary to the church today.

“Initially, ‘feminine genius’ sounded complimentary, but then we asked ourselves what it really means,” the girls wrote. “We think of the qualities it refers to which are supposedly inherent to womanhood, such as caring, nurturing and receptivity. We believe motherhood is really important, but for a number of reasons, focusing only on this does not relate to our ambitions as women.”

The synod’s working document says young people in many secularized parts of the world simply want nothing to do with the Catholic Church, because they find it not only irrelevant to their lives but downright irritating.

“This request does not stem from uncritical or impulsive scorn, but is deeply rooted in serious and respectable reasons: sexual and economic scandals,” for which they demand the church enforce a zero-tolerance policy.

But at the same time, the Vatican itself has fueled the latest scandal by refusing to respond to claims by a retired ambassador, Archbishop Carlo Maria Vigano, that Francis and a long list of Vatican officials before him covered up for ex-Cardinal Theodore McCarrick, the former archbishop of Washington.

Francis removed McCarrick as a cardinal in July after a U.S. church investigation determined an allegation that he fondled a teenage altar boy in the 1970s was credible. But it was apparently common knowledge in the Vatican and U.S. church that McCarrick pressured seminarians to go to bed with him.

The one bright spot for the meeting is that for the first time, two bishops from mainland China are participating in a synod, the first tangible result of last month’s breakthrough agreement between the Vatican and Beijing over bishop appointments.