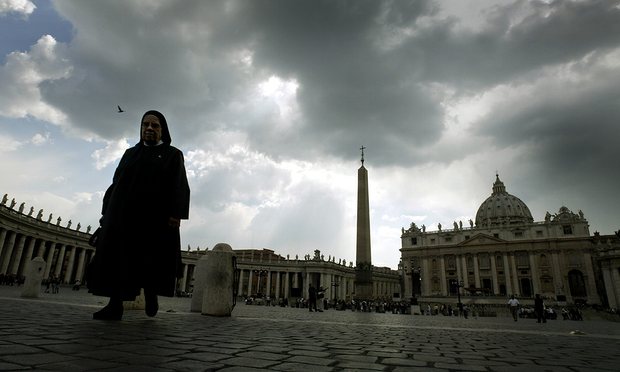 Last week Pope Francis acknowledged that the way the Church’s leadership has handled child sex abuse was driving away those who are the future of the Church: young people. He stated, “we ourselves need to be converted…we need to change the many situations that, in the end, put you off.”

The speech came not long after a Pennsylvania grand jury report revealed that over 300 priests had sexually abused at least 1000 children over a period of 70 years, and a study in Germany found a similar pattern of abuse and the Church’s failure to address it. The pope himself has been accused of protecting the now ex-Cardinal Theodore McCarrick, who is alleged to have sexually assaulted seminarians and a child. People have rightly wondered why, for so long, the pope and his bishops, who are supposed to be shepherds over their flock, have left the wolves to the sheep.

The pope, rather than asking for forgiveness, or having the Church’s leadership undergo an unspecified “conversion,” should focus on some basic institutional reforms. The first among those is revising the Code of Canon Law—the legal rules by which the Church operates. Bishops are sworn to follow canonical procedures as well as various instructions later issued by popes to clarify the application of canon law. As Cardinal Francis George of Chicago said in a deposition, “A bishop must obey the rules of the Church. We’re all in a society of law in the Church too.” Bishops also are only responsible to the pope—they do not answer to fellow bishops or parishioners.

It’s clear that if Francis wants to start solving the problem of how the Church has mishandled child sex abuse cases, he needs to undertake a revision to the Code of Canon Law to make the first response to abuse punitive, restore to diocesan bishops the capacity to defrock priests, raise the statute of limitations, reduce the stress on secrecy about alleged cases, require reporting to local civil authorities, and implement rules for handling errant bishops.

Canon law sees abuse through the lens of a priest violating his vow of celibacy, not from the perspective of harming a child. This has led bishops to interpret child sex abuse as a priest “really struggling with his sexuality” or as a “morals incident,” not as a case of criminal behavior.

It requires that the bishop’s first response be “pastoral”, not punitive, to the priest. Punishment, which can include removing the priest’s right to present himself as a priest in public and to perform the sacraments publicly, is only to be used as a last resort, when all other remedies have failed. That has led to the church failing to deal sternly and swiftly with suspected and confirmed cases of child sex abuse. Canon law encourages the bishop to wait and see if the priest will be a repeat offender.

Bishops are also prevented from defrocking their own priests under canon law. Between 1983 and 2001, priests had to be found guilty at a canonical trial, and the Vatican—officially, the pope—had to agree to dismiss them afterwards. Canonical trials are complicated, and require the participation of the victim, who may be understandably reluctant to be grilled by clerical judges or may have been advised by a lawyer not to cooperate pending a civil lawsuit. Verdicts are easily overturned on technicalities. Even when bishops recognized they had a sexual predator who should not be around diocesan children, their hands were tied. As one Los Angeles diocesan official wrote of a priest in 1988, “Given his past, I don’t think we can assign him to parish ministry, and there are no clear alternative options at the moment.”

After deciding it needed to control cases directly, since 2001 the Vatican has required that bishops send all credible cases of child sex abuse to the Vatican. It decides whether to order a canonical trial or use an administrative procedure to address the case. Even a finding that a priest has serially abused children does not automatically result in laicization (“defrocking”). Instead, the Vatican may decide, as it has in some cases, that the priest should live out his life in a state of “prayer and penance,” or that the events were so long ago that the priest doesn’t deserve punishment. Priests were dismissed in only 25 percent of 3420 cases sent to the Vatican between 2004 and 2013.

The statute of limitations in canon law needs to be extended or abolished. For decades it had been only five years. In 2001 it was raised to 10 years after the victim’s 18th birthday. With victims understandably reluctant or unable to come forward as youth, many cases eventually reported were beyond formal procedural limits. (They were usually beyond the civil jurisdiction’s statutes of limitations, too).

Canon law requires bishops maintain secrecy about suspected cases. Even though the Vatican has said bishops should obey local reporting laws, the secrecy requirement is in canon law, whereas the reporting to local authorities is not. Bishops, with a sworn moral obligation to obey the Church, opt for secrecy.

The Vatican also needs to develop formal procedures within canon law for punishing bishops who are negligent in their handling of abusive priests. There is no such procedure now. The pope needs to, at a minimum, establish a tribunal. The catch is, due to the strictures of canon law, what looks to outsiders as negligence by bishops is often behavior required by church procedures.

There are several aspects of Catholic theology that have been a hindrance to addressing clergy child sex abuse. One is the theology of forgiveness; the Church has a strong belief in the redemptive and curative power of confessing sin and being forgiven, and has applied this to priests. Pope Francis commented in 2013, “Many times I think of Saint Peter. He committed one of the worst sins, that is he denied Christ, and even with this sin they made him pope.” The Church needs to stress that one can be forgiven—but also face consequences for their actions.

Another is celibacy, not because, as is often assumed, abusing priests are substituting children for adult heterosexual partners, but because bishops, and the Vatican, bend over backwards to retain priests, due to the substantial decline in their numbers. Statistics from the Vatican show that the number of priests worldwide is lower than it was in 1970, even though the world’s Catholic population has doubled since then. The celibacy requirement is one clear barrier that discourages many men from entering the priesthood and encourages the Church to hang onto those inside, no matter their criminal behavior.

So now we must consider, will these recent revelations finally be a turning point? We’ve been here before: cardinals and bishops passing priests around and covering up abuses, Catholics outraged, the general public appalled, and attorney generals launching investigations. What may be different is that now there is public awareness that the problem goes all the way to the top. The pope and the Vatican now need to take action to change the rules by which the Church handles abusing priests and bishops.

While the Catholic church has been affected by secular trends in declining religiosity, as have other mainstream religions, its obtuseness on how it has handled clergy child sex abuse may be further damaging adherence. It has certainly hit the Church financially. It isn’t clear that the Vatican will see this any differently. In speaking to the press on the plane home from Estonia, the Pope relativized the Church’s actions, comparing that to how child abuse in families has been handled over time. He said he has never approved an appeal from a priest after a canonical trial verdict, ignoring that he has reinstated priests who were laicized through administrative processes.

The Vatican has refused to investigate ex-Cardinal McCarrick. Francis needs to be honest that the Church does not have a zero tolerance policy on clergy child sex abuse. The hypocrisy has turned away many Catholics. The risk for the Church is that while the leadership is praying for their own conversion, the faithful will convert to something else.