John Nienstedt resigned in disgrace from the archdiocese in 2015 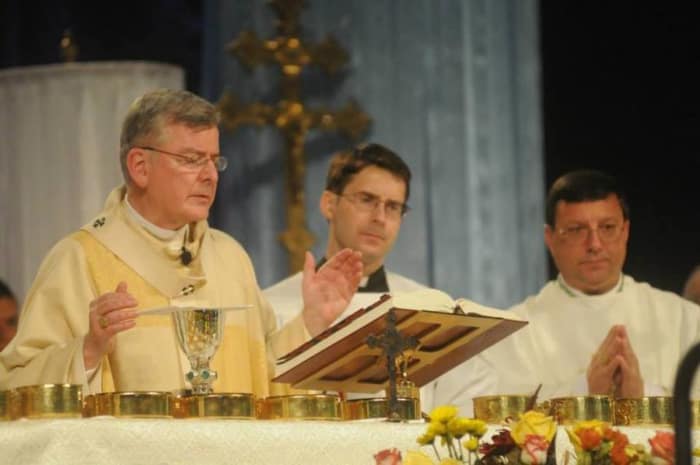 The man who was at the helm of the Twin Cities Catholic church during the clergy abuse scandals is now officially banned from celebrating mass in his former archdiocese.

Former Archbishop John Nientstedt, who resigned from the archdiocese in 2015, is no longer free to “exercise public ministry” there, per an order from his successor, Archbishop Bernard Hebda.

The reason? Nienstedt is himself facing unresolved allegations of abuse involving minors.

According to a Friday announcement from Archbishop Hebda, the alleged incident is said to have occurred in 2005, when Nienstedt was bishop of New Ulm. He is alleged to have undressed in front of two “unaccompanied minors” in his hotel room at a World Youth Day event in Germany.

As the announcement points out, Nienstedt denies this ever happened.

However, he has also been accused of “inappropriate conduct with adult males,” and according to documents that surfaced in 2016, Neinstedt has been dogged by allegations from fellow priests and rumors of a “promiscuous gay lifestyle” for years.

In his letter, Hebda points out that “any effort by the Vatican” to address these latter allegations was suspended in 2015 when Nienstedt resigned, leaving the matter “unresolved for the accusers, for Archbishop Nienstedt and for the public.”

Hebda says he is “troubled by the failure to bring closure” to an investigation into the matter, and that he shares the frustration of all involved that the situation has been left in limbo.

The archbishop added that he believes “this situation highlights the need for a better-defined process and independent mechanism to resolve allegations made against bishops.”

Hebda’s Friday declaration, he points out, “is not intended to convey an indication or presumption of guilt,” which is true of all “similar cases involving our priests and deacons.”

Earlier this year, Nienstedt stepped down from his consulting duties at the Napa Institute, a Catholic organization.

According to the National Catholic Reporter, the resignation came amid a wave of criticism against the Napa Institute for employing Nienstedt despite its “stance against bishops accused of mishandling sexual abuse.”

Indeed, Nienstedt was heavily criticized for his leadership during the high-profile sex abuse cases that rocked the Archdiocese of St. Paul and Minneapolis.

The archdiocese declared bankruptcy in the wake of a multimillion-dollar settlement against the church, and is still working to administer those settlements.