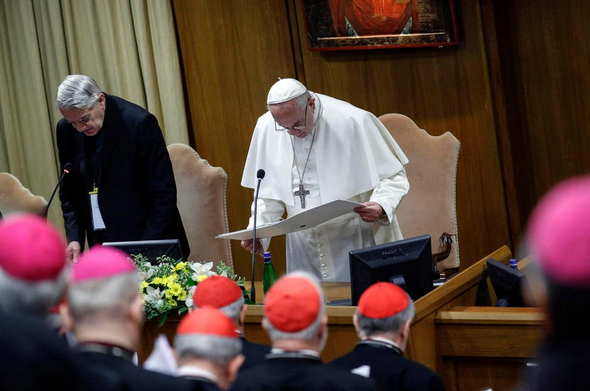 By Jason Horowitz and Elisabetta Povoledo

Called to the Vatican this week by Pope Francis to grapple with the crisis of child sexual abuse by clergy, nearly 200 leaders of the Roman Catholic Church sat for lectures on responsibility, accountability and transparency.

But privately, they kept raising one issue not on the agenda: homosexuality.

“We spoke of this,” Bishop Ricardo Ernesto Centellas Guzmán, the president of the Bolivian Bishops Conference, acknowledged on Thursday, the start of the extraordinary four-day meeting of bishops and other church leaders.

Yet homosexuality is exactly the topic the conference organizers had hoped to avoid, pointing to ample research finding no connection between homosexuality and pedophilia.

“The main issue is power,” said the Rev. Hans Zollner, a member of the Vatican’s child-protection commission and president of the Center for Child Protection of the Pontifical Gregorian University.

Abuse “can be heterosexual or homosexual,” he added in an interview.

At the meeting, even as organizers and attendees pushed time and again to focus the discussions on pedophilia, the conflicting views about homosexuality within the church emerged as a distraction.

Jean-Claude Hollerich, the archbishop of Luxembourg and Bishops’ Conferences of the European Union, moderated one of the meeting’s French-speaking discussion groups, which included leaders from some Francophone African nations.

He said on Saturday that some bishops kept returning to homosexuality as a cause for abuse because “some people have some models in their head and they will always keep to it.”

He said he and other bishops had sought to change their minds.

“I tell them the prime minister of my country is homosexual,” he said. “And he would never abuse children.”

Bishop Rochus Josef Tatamai, of Kavieng, president of the Bishops’ Conference of Papua New Guinea and the Solomon Islands, said on Saturday that in his English-language group, homosexuality was “alluded to” during discussions about the training of new priests.

He suggested that “a desperate need for priests” in Europe and the United States had led seminaries to be lax in screening for candidates, some of whom turned out to be gay and abusers.

Pope Francis has clearly shifted the discussion, if not church doctrine, to a more inclusive position on homosexuality.

In 2013, he responded to questions about a supposed “gay lobby” in the Vatican by saying, “Who am I to judge?” — a remark that liberals celebrated and conservatives lamented

But while Catholic Church teachings state that people with homosexual tendencies “must be accepted with respect,” it also calls deep-seated homosexual inclinations and acts “intrinsically disordered.”

Some conservative American prelates have sought to bring down Francis, seeing him as a protector of a gay subculture that is corrupting the clergy. Some have said his positions are eroding the church’s traditional values and planting the seeds of sexual abuse.

Bishops from Africa, Asia and Latin America say that in failing to connect homosexuality to sexual abuse, the Vatican is ignoring that a vast majority of abuse is perpetrated by priests on male victims.

This view has been echoed by Cardinal Gerhard Ludwig Müller, the church’s chief doctrinal watchdog until Pope Francis forced him out in 2017.

The cardinal told the German magazine Der Spiegel this month that “far more than 80 percent of the victims of sexual abuse under 18 years of age were young men in puberty or post-puberty.’’

And he argued that homosexuality should have been a central topic at the Vatican meeting this week.

Cardinal Blase J. Cupich, the archbishop of Chicago, a favorite of Pope Francis and an organizer of the conference, said on Monday that it was not the case that “homosexual people are more prone to abuse children than straight people.”

Asked about Cardinal Müller’s remarks, Cardinal Cupich told reporters “it’s important to admit the fact” that the predominance of underage victims are male. But he pointed to landmark studies in the United States and Australia showing that homosexuality in itself is not a cause of child sex abuse, and that access to children is a major factor.

Each day at the meeting, reporters from conservative Catholic news outlets peppered the meeting’s organizers with questions about why they are dodging the topic of homosexuality.

Their short answer: because it is irrelevant.

Homosexuality has “nothing to do with the sexual abuse of minors,” Archbishop Charles Scicluna of Malta, the Vatican’s leading sex crimes investigator, said on Friday.

Still, leading conservatives and traditionalists persisted in their arguments.

Cardinal Raymond Burke of the United States and Cardinal Walter Brandmüller of Germany published an open letter to the presidents of bishops’ conferences representing various countries at the meeting, urging them to end their “conspiracy of silence” about the “plague of the homosexual agenda.”

And Archbishop Carlo Maria Viganò, a former papal ambassador to the United States who accused the pope in August of protecting abusive gay clerics and called for his resignation, argued on Thursday that it was fitting that the meeting’s opening that day coincided with the feast of St. Peter Damian, an 11th-century monk who fought against “sins of sodomy” in the church.

(Some church historians cautioned the archbishop that the saint was perhaps not the best model, as he had also denounced as immoral a Byzantine princess for introducing the practice of eating with a fork.)

The conference coincided with what appeared to be the strategically timed release of “In the Closet of the Vatican,” a gossipy book by the French author Frédéric Martel, who characterized the Vatican as “one of the biggest gay communities in the world.”

Those who attack Pope Francis “are very homophobic and for the large part live a double homosexual life,” Mr. Martel said Wednesday at a news conference in Rome, adding that as a gay man, he was able to determine who in the Vatican was gay.

The book’s release was criticized by advocates for abuse victims.

“Let’s be clear,” said Peter Saunders, a Briton who was forced off the Vatican’s child protection panel for criticizing it as toothless. “There is no link between people who are gay and people who abuse children. And I think that that is a lie that has to be hammered into the ground

Estimates of how many priests are gay vary widely, but at a minimum, it is considered to be a significant percentage. One priest in Florida recently told The New York Times that a third of Catholic clergy members were gay, a third were straight, and a third remained a mystery — even to themselves.

Some advocates for gay equality in the church said their message seemed to have gotten through to church leaders.

Francis DeBernardo, executive director of New Ways Ministry in Maryland, a Catholic organization that supports gay men and lesbians, said in Rome that he was pleasantly surprised at the conference to find homosexuality “debunked as a cause” of abuse. He was hoping the Vatican “would give a more definitive, official statement from the pope to that effect.”

But among the bishops in the room with Francis, the issue was not exactly settled.

Entering the conference, Bishop Gonzalo de Villa y Vásquez of Guatemala said, “I think it can be a legitimate question whether or not there is a link between homosexuality and abuses.”