Why independent Catholic churches are flourishing 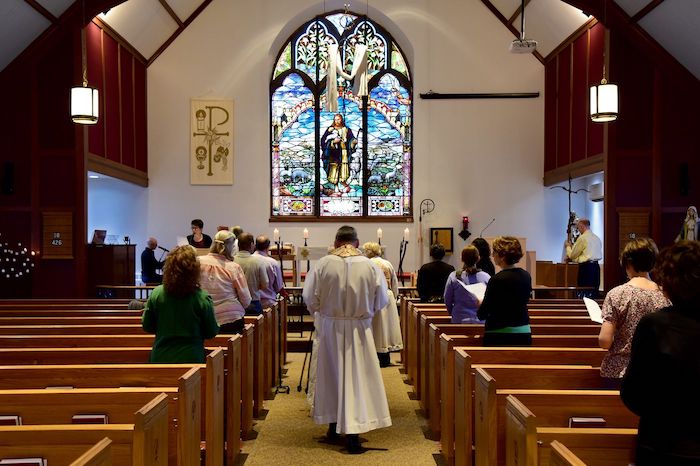 On Holy Thursday, a solemn day in the most sacred week in the Catholic calendar, St. Miriam’s felt like any other Catholic church: The altar featured a crucifix draped with white fabric and a tabernacle, and the Rev. James St. George, also known as Father Jim, was preparing the Flourtown church for a foot-washing ceremony, with towels and washbasins placed on the altar.

But St. Miriam’s is not Roman Catholic, nor affiliated with the Vatican: It’s catholic — with a lowercase c.

It’s one of at least four independent Catholic parishes that cropped up around Philadelphia between 2005 and 2010, nourished in part by the advantages of social media and email. Now with more than 600 parishioners, St. Miriam’s has become perhaps the largest such congregation; like the others, drawing Catholics eager for new ways to practice an old faith.

Its pastor last week noted the sad parallels between the worldwide Roman Catholic Church and the Paris blaze that seemed to rage untouched until it had already consumed part of its historic Notre Dame Cathedral.

“They don’t admit they’re on fire until it’s too late,” St. George said. “And now the whole church is burning.”

The Roman Catholic Church is still the biggest religious institution in the United States — and the world, with about 1.3 billion adherents, according to the Vatican. But fewer and fewer Americans are identifying as Catholic. The clergy sex-abuse scandals, conversion to other faiths, and declining religiosity in general all play a role, according to polls. A Pew study found that between 2007 and 2014, the Catholic Church lost more members than any other religious institution, by a wide margin.

“If ex-Catholic was a religion, it’d be the third-largest in the United States,” said Julie Byrne, a professor of religion at Hofstra University whose book, The Other Catholics: Remaking America’s Largest Religion, explores independent catholicism.

Alternative Catholic churches have existed for centuries. The Orthodox Catholic Church, which split with the Roman Catholic Church in 1054 and today maintains its seat of power in Istanbul, has more than 100 million members.

And not all are alike. Some are conservative, offering Mass in Latin. Others are characterized by an openness to concepts and stances that the Roman Catholic Church eschews, including female priests and gay marriage — both of which a majority of U.S. Catholics support, according to the Pew poll.

She said such a conversion comes at a price: The Rome-led Catholic Church has made sure to convey that independent parishes aren’t “the real thing,” suggesting that joining one could jeopardize a Catholic’s salvation.

A spokesperson for the Archdiocese of Philadelphia last week declined to wade into the debate, instead noting that though the church has been “uneven in fidelity to Christ and His word,” it is “the only place where Christ and His word continue to be passed on in all of its fullness and clarity.”

St. George said he encountered that sort of resistance in St. Miriam’s first year, when a listing for the church’s Catholic services in a local Roxborough paper triggered a letter from Roman Catholic clergy suggesting its use of the word Catholic might “mislead” people. Instead, attention from Roman Catholic churches only helped grow his congregation, he said.

Almost every year since, members of St. Miriam’s have worked to build its infrastructure — painting walls, restoring the stained glass windows, and maintaining the graves on the 12-acre campus along Bethlehem Pike that it inherited from a Lutheran church.

St. George began his path to priesthood at a Roman Catholic seminary, St. Mark’s in Erie, but said he had long felt unsettled by parts of church doctrine, including its positions on LGBT people and women. Such stances had even resonated inside his family’s Italian Catholic home in northwestern Pennsylvania.

“My sister couldn’t serve the altar or read at Mass,” St. George said, “and she would come home and cry.”

Now he’s a bishop in Old Catholic Churches International, part of an independent Catholic movement that split from Rome in 1870 and dates to an 18th-century Dutch separatist movement.

Mother JoEllen Werthman confronted the same kind of conflicts when she grew up Catholic on Long Island decades ago and then, in the 1980s, felt a religious calling.

“I couldn’t figure out how to have a boyfriend and be a nun,” said Werthman.

When it became clear the Roman Catholic Church would not accept women as clergy in her lifetime, Werthman began to look elsewhere, and found a seminary at the Catholic Apostolic Church of Antioch to ordain her.

“What will I say to God when I die?” she asked. “Did I follow the rules, or did I answer the call?”

These days, the 73-year-old cleric is married, and leads St. Mary Magdalen in Bensalem, a congregation of about two dozen people out of a building owned by an Episcopal church.

At Werthman’s church, her homily is followed by an open discussion with parishioners. The congregants appreciate being treated “like adults,” Werthman said.

“Most people have never been given the opportunity to explore their questions once they get past being a kid,” she said.

St. George said his church saw an increase in attendance after the wave of clergy sex-abuse scandals in the early 2000s. His parish, which also runs a preschool and kindergarten, has a program called KidSafe, a set of policies concerning child welfare.

Lorraine Cuffey joined the Flourtown church on Palm Sunday six years ago after learning that the church she had been attending failed to remove two priests accused of child abuse. Now, she’s the president of St. Miriam’s board of directors.

For Lewis Salotti and his wife, Ramona, who joined St. Miriam’s three years ago, the independent Catholic church is a perfect mix of tradition and flexibility.

“It was comforting to come here and see the same service and be familiar with it,” Salotti said. But with clergy who can marry and have families, he said, “they are living in the world just like us, and I think that really makes a difference.”

St. George says his church is about bringing everyone together under the “Catholic fold.”

“When the doctrine of the church harms people, you need to look at it again,” he said. “The church shouldn’t hurt people.”