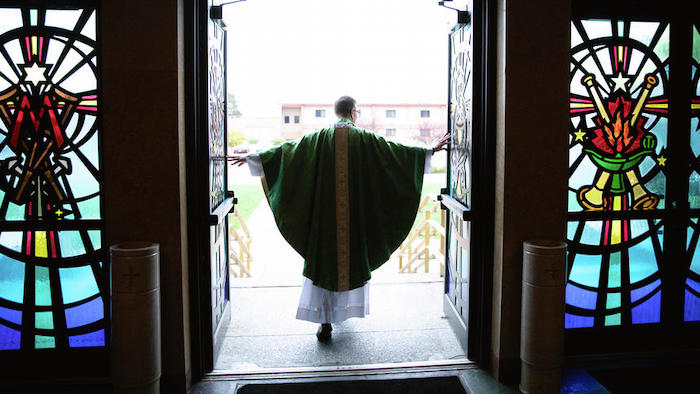 In Iowa as in the rest of the country, the incidence and duration of sexual abuse by clergy “were overwhelming” and the cover-up “extensive” in earlier decades, a report by the Iowa Attorney General’s Office that was released Wednesday concludes.

A yearslong investigation by the office reviewed nearly 50 complaints of sexual abuse against current and former Catholic priests and other officials, including 17 allegations that had never before been reported.

In a statement Wednesday, the bishops of Iowa’s four Catholic dioceses said the church “is committed to do all that is humanly possible to protect minors from the sin and crime of clergy sexual abuse, and to promote healing.” The bishops said the new report would be studied for ways to improve existing reporting and investigating procedures.

The state’s investigation was inspired by a sweeping and scathing report issued by the Pennsylvania Attorney General in 2018.

In Pennsylvania, prosecutors used grand jury subpoenas to uncover hidden church records. Iowa does not have statewide grand jury powers, and so Attorney General Tom Miller worked with the state’s dioceses, which voluntarily shared records of past cases and complaints. The state also set up an independent hotline for clergy abuse complaints, among other outreach to possible victims.

Those efforts produced a total of 50 complaints, 45 of which were against Catholic church leaders and five involving other denominations. Of the new complaints, many brought allegations against priests who had already been accused of abuse by other victims.  Several of the new complaints listed in the report do not name the priest, in some cases because their identity is not known.

Lynn Hicks, Miller’s chief of staff, said in an interview that many victims indicated they felt the church in past decades was not supportive or receptive to their complaints.

“A lot of them felt like … they were the ones on trial when they had come forward, and then others talked about why they didn’t come forward — the lack of trust or the fear of not being believed, that sort of thing,” he said. “We hope that that’s changed.”

All of the allegations against Catholic priests fall outside the state’s statute of limitations for criminal prosecution. Some, but not all, of those accused are named in lists each diocese maintains of credibly accused priests. Several were already known to be the subject of dozens of accusations.

Three of the clergy named in complaints remain active as priests. The Rev. John Stack, a priest in Clinton, was suspended in 2013 over allegations of abuse in the 1980s, but was reinstated by the Diocese of Davenport in 2016 after a church trial found the charges not proven. Another, Hicks said, is in the Diocese of Sioux City, although it is not clear from the report who that is.

One claim resulted in a new investigation into the Rev. Robert “Bud” Grant, an instructor at St. Ambrose University and the parish priest in Blue Grass, a town of 1,500 just west of Davenport. The Diocese of Des Moines said in November 2020 that Grant had committed misconduct — but had not sexually abused any minors — and allowed him to return to ministry with restrictions limiting his contact with persons under 24.

A spokesman for the university said in a statement Thursday that Grant’s suspension from teaching at the university, where he remains a member of the faculty, was lifted this spring and he continues to work under restrictions imposed by the Des Moines Diocese.

The report found that, in Iowa as in other parts of the country, “the image and reputation of the church were put ahead of the enormous harm to young people.”

Hicks said the investigation found “plenty of evidence of priests being moved and things not being disclosed,” although he said things appear to have significantly improved since 2002, when the U.S. Conference of Catholic Bishops adopted a major set of reforms to respond to a series of church scandals. Only five priests have been accused of misconduct occurring since 2002.

The report notes that the church made a notable change by requiring “automatic reporting of any complaints concerning abuse to the criminal authorities.”

All four of Iowa’s bishops are relatively new in their positions, the report notes, and none was involved in handling or covering up past complaints.

The report finds that the dioceses of Sioux City, Dubuque and Davenport “made a good-faith effort” to maintain their public lists of credibly accused clergy. The report includes some criticism of the Diocese of Des Moines, saying it was late in publishing its list and has a policy to not investigate single complaints against deceased priests. The diocese also declined to share some investigative reports, claiming attorney-client privilege.

Fewer than a third of priests facing allegations in the Des Moines diocese have been named on the diocese’s public list, compared to more than half in the three other dioceses. However, the report acknowledges some complaints are in a “gray area” and says Des Moines does report all allegations to law enforcement.

The Des Moines Diocese said in a statement Thursday that, since 2003, it has implemented mandatory background checks, which include a search of the sex offender registry for anyone who would be spending time with children in the diocese’s parishes, schools and institutions.

“The report brought to light that policies and procedures are in place to protect people and ensure justice is served so the church achieves a high standard of integrity in the ministries it offers,” said Des Moines Bishop William Joensen. “We, as a diocese, are committed to rigorous standards of accountability. I want to ensure that the diocese is committed to the safety of children.”

The Des Moines Diocese also noted that victims of abuse now report such conduct to a third-party Victim Assistance Advocate, not through the church.

In a separate statement, Davenport Bishop Thomas Zinkula apologized for the past abuse committed by clergy and described the steps taken in the past 20 years to safeguard children.

“These efforts have helped. The Diocese of Davenport has not received a founded report of child sexual abuse that occurred in the past 33 years,” he wrote. “Nevertheless, our Church and society need to continue to be vigilant in providing safe environments for children to thrive and grow.”

Of the five complaints received against church leaders in other denominations, the Attorney General’s Office is not identifying any of the accused but notes that at least one remains active as a pastor in the Cedar Falls area. Two of the complaints involve conduct that falls within the statute of limitations for possible criminal prosecution.