A growing lobby of churchmen and religious experts are challenging the speed with which the Vatican is propelling Pope John Paul II towards sainthood, just six years after his death. 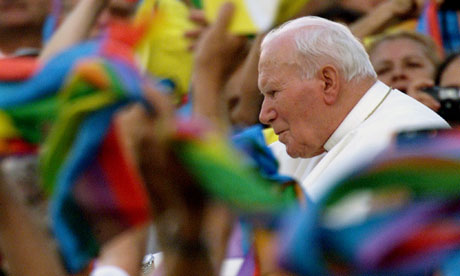 Hailed as the pope who helped bring down communism, who prayed alongside Jews and Muslims, and shrugged off an assassination attempt, John Paul will be beatified in St Peter’s Square next Sunday, a first step towards sainthood.

The Vatican is erecting tent cities and stocking up with millions of bottles of water. More than 300,000 people are expected to descend on Rome to honour the Polish pontiff whose charisma gave Catholicism a new lease of life.

But as the crowds begin to arrive, doubts are being expressed over the decision to begin beatification proceedings for John Paul immediately after his death in 2005, instead of observing the usual five-year waiting period.

Some experts are questioning whether John Paul is fit for sainthood at all, pointing to his poor record in handling the sex abuse allegations against priests that came to the fore during his 26-year papacy. “I oppose this beatification and predict history will look unkindly on John Paul, who was in denial as the worst crisis since the Reformation happened in the church,” said Father Richard McBrien, a theology professor at Notre Dame University in the US.

“My doubts are about John Paul being beatified by his successor, Pope Benedict,” said the Catholic historian Michael Walsh. “It appears incestuous and akin to the habit of deifying one’s ancestors.”

Even as Benedict faced the fallout from accusations that scores of priests abused children around the world, he has pulled out the stops to beatify John Paul. Sorting through hundreds of miraculous cures attributed to the pontiff, Vatican officials have selected the overnight recovery from Parkinson’s disease of a French nun as the miracle required for beatification. Experts believe canonisation could follow in two to three years.

“Years from now people may be saying, why the rush?” said Father James Martin, a Jesuit priest and author. “It takes a little bit away for future generations.” Tom Reese, a theologian and author, added: “What we need are fewer popes and priests beatified, and more real lives.”

The ramifications of the sex abuse scandal will continue as an internal Vatican report on predator priests in Ireland reportedly lands on Benedict’s desk, ahead of the publication next month of an Irish government report on the scandal. It is expected that the report will shed light on whether the abuse was ignored by Bishop John Magee of Cloyne, a former private secretary to John Paul.

John Paul’s unwavering support for Marcial Maciel Degollado, the Mexican priest and morphine addict who ran the powerful Legion of Christ movement, has also sparked concerns. Maciel has been accused of abusing seminarians, fathering up to six children and allegedly pacifying the Vatican through large donations, despite complaints about his behaviour dating back to the 1970s.

Supporters of the pope have argued that John Paul was wary of sex abuse accusations after seeing communist officials use fake charges to discredit priests in his native Poland. But Walsh said there was no excuse with the Legion. “John Paul clearly safeguarded Maciel,” he said. Benedict was quick to banish Maciel to a life of penitence in 2006 after his election as pope.

Those voicing reservations over John Paul’s beatification are very much in a minority. Martin said: “Among church insiders there is a sense of the perceived haste over the beatification, but it’s a small concern among ordinary believers. The Vatican is often criticised for not responding to the will of the people, but here you can argue it is doing just that.”

Visitors to his simple marble tomb are convinced John Paul is worthy of beatification. “He had courage, look at how he forgave the man who shot and wounded him in St Peter’s Square in 1981,” said Olivier de Pommery, a banker from Paris. “Through his own illness at the end of his life he taught us to live and suffer with love,” said Marie Louise Murebwayire, from Rwanda. “He made suffering become love and gave dignity to all people who suffer.”

Following his beatification, John Paul’s remains will be moved to a large, ornate chapel near the entrance to St Peter’s Basilica. The tomb of a 17th-century pope, Innocent XI, will be moved to make space.