Incoming Fresno Bishop Armando Ochoa has been sued by five parishioners from an El Paso, Texas, parish who say the bishop converted funds they donated specifically for construction of a chapel for the traditional Latin Mass to other uses — and they want their money back. 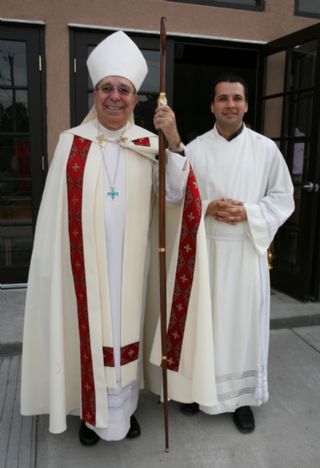 A Mass of Installation for Bishop Ochoa is scheduled tomorrow in Fresno. Pope Benedict XVI named him as the new Fresno bishop on Dec. 1. Before leaving El Paso, where he had been bishop since 1996, Bishop Ochoa took the extraordinary step of suing one of his priests, Fr. Michael Rodriguez. The bishop’s lawsuit alleges that Fr. Rodriguez, a problematic and outspoken priest, committed financial irregularities and violations of diocesan policy on the handling of parish funds.

The parishioners’ lawsuit, announced in a Jan. 30 press release, is the latest development in the ongoing legal battle. The five parishioners say that more than six weeks ago they asked for a meeting with Bishop Ochoa “to resolve this situation in private and in a spirit of Christian charity,” but never received a response from the chancery.

“We did not donate our money in order for it to be seized by the diocese or San Juan Bautista Parish and used for other purposes,” said the news release. “We simply asked that our money be used for the specific intention for which it had been donated or that it be returned to the rightful owners.”

In a Jan. 11 press release, Bishop Ochoa said Fr. Rodriguez had been removed as administrator of San Juan Bautista Parish on Sept. 20, 2011 “based on credible information and documents that show that he intentionally and materially failed to comply with the Manual of Policies and Procedures of Parish Finances of the Roman Catholic Diocese of El Paso.”

“Fr. Rodriguez’s handling and use of donated funds has compromised the financial integrity of San Juan Bautista,” Bishop Ochoa said in the press release. “I have appealed repeatedly to Fr. Rodriguez to make a complete disclosure and a thorough accounting of his financial administration of the parish but he has refused to do so.”

The bishop said Fr. Rodriguez’s refusal to provide financial information left him with no alternative but to file a lawsuit against the priest and his brother, David Rodriguez.
The parishioners’ lawsuit sheds new light on the conflict between Fr. Rodriguez and Bishop Ochoa. According to the suit, beginning in 2007, parishioners
“expressed a desire to celebrate the Holy Sacrifice of the Mass in accordance with the Usus Antiquior of the Roman Rite and to do so with the installation of an altar and sanctuary designed for such Mass.”

Their donations, said the parishioners, “were not to be used for any other purpose.” Fr. Rodriguez, they said, collected the money and moved forward with plans for the altar and sanctuary, including the approval of architectural plans.

Parishioners James Herget and Marie Celeste Herget allege in the suit they contributed $32,820; parishioners Mario A. Macias and Francella Macias estimate their donations at $6200; and parishioner Aurora L. Alvarado alleges she contributed $1070. All of them ask that their money either be used to complete the traditional altar and sanctuary — or be returned to them.

Bishop Ochoa and Fr. Rodriguez have been at odds since 2010, when the priest began attending city council meetings to speak out against homosexuality. Fr. Rodriguez also authored several opinion pieces in the El Paso Times critical of the El Paso City Council for extending health insurance to all employees regardless of marital status or sexual orientation.

When Fr. Rodriguez became involved in a recall campaign against some in city government responsible for that policy, Bishop Ochoa removed him as parish administrator. “This type of intervention in the political process by religious organizations such as the Diocese of El Paso and San Juan Bautista Church is not permitted under Section 501 of the Internal Revenue Code,” said Bishop Ochoa in a statement issued at the time.

Fr. Rodriguez has adamantly denied any wrongdoing, saying that Bishop Ochoa’s allegations that he improperly handled donated funds were not true.

“I have always honored, respected, and made good use of the financial patrimony of San Juan Bautista,” said Fr. Rodriguez in a Jan. 12 statement. “I stake my entire reputation on this claim.”

According to Fr. Rodriguez, he met with Bishop Ochoa on Sept. 20, 2011, and “opened my heart to my bishop, like a son to a father, and was completely honest and forthcoming with him as to the financial affairs of San Juan Bautista. I told him everything. He chose not to believe me… I have never misappropriated or misused parish funds.”

True to his word, Fr. Rodriguez was back before the El Paso City Council yesterday with a statement attempting to explain the Church’s teachings regarding homosexuality to his elected representatives.