CLERICAL SEXUAL abuse is inevitable given the meaning system that is taught by the Catholic Church and to which many priests adhere. 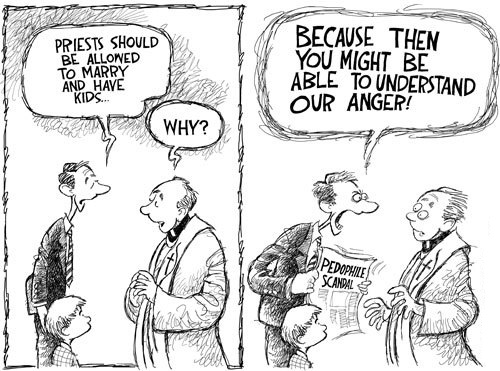 Contradictions in that system lead to failure, increase shame and a way of living that encourages deviant behaviour.

This is the thesis of a revealing book on sexual abuse within the church by an Irish academic and therapist who interviewed, at length, nine priests and brothers convicted of child abuse, who counselled several other clerical abusers and who undertook extensive research on the issue for her book Child Sexual Abuse and the Catholic Church: Gender, Power and Organisational Culture. The author is Marie Keenan of the school of applied social science at UCD.

It is evident that the apostolic visitors – Cardinal Cormac Murphy-O’Connor, Archbishop Emeritus of Westminster, Cardinal Seán O’Malley, Archbishop of Boston, Thomas Christopher Collins, Archbishop of Toronto and Timothy Dolan, Archbishop of New York – didn’t read the book or speak to Keenan while in Ireland.

Their report, published in summary form yesterday, might have been very different had they done so.

From the moment of their ordination they are apart, apart in the minds of other convinced Catholics and apart in their own minds. And they are also celibate, because of that “calling”. Abjuring intimate sexual relations, sublimating their sexual urges and widely admired in the communities they inhabit on account of that sublimation.

She says this theology of sexuality contributes to self-hatred, shame and a sense of personal failure on the part of some priests.

This tension is often exacerbated by a sense of powerlessness on the part of many priests within a hierarchical, authoritarian church, subject to the authority of bishops or heads of religious orders, often allowing them with little sense of being in control of their own lives. And this is further added to by loneliness.

Some priests cope with this by easing off on the celibacy bit. Some ease off the celibacy bit with guilt, some with a sense of doing their best with their human frailties.

According to Keenan it is often the priests who aspire to priestly perfection and are hugely conflicted with the demands of such perfection that resort to child sexual abuse, usually, she says, not opportunistically, but consciously and deliberately over time. And this seems to be confirmed by other research.

Moreover, in many ways, the release of the confessional – the opportunity to dispel guilt in a secret ritual – compounds the problem. The “external” imposition (by the church) of the priestly ethic, rather than the cultivation of an internal ethic, also contributes to the propensity to abuse; for the construction of an internal ethic involves reflection on the impact of one’s conduct on the lives of others and that seems to have been missing in the make-up of many of the clerical abusers.

There is nothing at all of this in the report of the bachelor apostolic visitors, instead a recommendation that the culture of the seminary be intensified in the lives of aspirants for the priesthood. No acknowledgment is made of the tension inherent in the celibacy thing and the hypocrisies and traumas to which it gives rise.

In general there seems to be little interest in why this clerical abuse has occurred and what it is within the Catholic culture that has engendered it. The dismissive explanation that it is all due to the “flawed” personalities of the abusers ignores the cultural and formative factors that at least contributed to the phenomenon.

There is a further point which is also not addressed at all by the Catholic Church and it has to do with society’s treatment of the clerical perpetrators after they have served their sentences. They are rendered effectively homeless by a public rage directed at them, engendered largely by the media.

Our system of justice ordains that people who commit even the most heinous of crimes are brought before the courts, convicted, publicly shamed and then imprisoned, after which, that’s it. And yet, often in denial of their human rights, they remain hounded for the remainder of their days. Moreover, very often those who do the most vigorous hounding are those who speak most loudly that bit from what is known as “the Lord’s Prayer”: “Forgive us our trespasses, as we forgive those who trespass against us.”