Some months ago a fellow contacted out of the blue and identified himself as Hank Estrada. Apparently he found me through the Gay Catholic Priests Facebook page. Hank went on to introduce himself and tell me about his latest book, UnHoly Communion-Lessons Learned from Life among Pedophiles, Predators, and Priests. This immediately piqued my interest. His book was published just weeks before my book, Secrecy, Sophistry and Gay Sex In The Catholic Church: The Systematic Destruction of an Oblate Priest in the summer of 2011. After a short conversation on Skype we decided to exchange book and read each other’s story. Hank was way better than me in getting this job done. In record time he plowed through my rather ponderous book and we spoke again on Skype in the earl fall.

Hank complimented me on my work and we spoke for nearly an hour about the many church related experiences we had in common. You see, Hank was a Claretian seminarian in Los Angeles, California around the same time I was Ordained and Oblate priest in Oakland California. 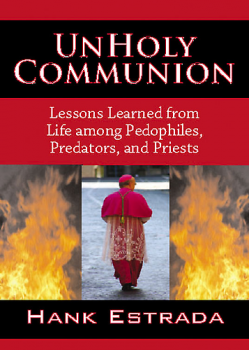 I told Hank that I had yet to get to his book. I apologized for being so slow and promised that I’d get to it as soon as possible. Well it took me way longer than I thought. It’s astonishing how life seems to get in the way of of my best intentions. At any rate, I finished Hank’s book yesterday, Christmas Day. Curiously enough, Hank had some time to spend yesterday afternoon so we met on Skype once again to discuss his book.

UnHoly Communion-Lessons Learned from Life among Pedophiles, Predators, and Priests is primarily a story of the indomitable human spirit. Hank’s story is harrowing — years of childhood incest with his pedophile uncle while his alcoholic family lived in denial.  His escape to what he believed to be a safe haven, the Church, only to be sexually abused by a trusted superior.   And how the leadership of his religious community added insult to injury by ignoring his story and shamefully protecting the sexual predator in their midst permitting him  to move from one victim to another.

Despite all of the abuse, deception and betrayal, Hank triumphs. He is now a nationally recognized spokesman and tireless advocate for male victims and adult survivors of sexual assaults. In 1986, he founded the first national nonprofit organization to support non-offending adult male survivors. His book, despite the difficult subject matter and candid recollections of his ordeal, is really a testament to all of us who have been through similar experiences. It is a message, presented in a very accessible, matter of fact style, of hope, support, and encouragement.

I was particularly touched by his perception, as a seminarian, of the Catholic priesthood that he aspired to join. He perfectly captures the moral and ethical minefield that each priest and religious faces. And how easily it is for any one of us to succumb to the dark side. I quote…

While living in a community of Catholic priests and brothers, I quickly learned about the many personal benefits a religious clergyman receives throughout his priesthood, among them prestige, privilege, protection and often unchallenged influential power over parishioners. Could these questionable benefits lead to arrogance, self-righteousness, and a false sense of invincibility on the part of the priest? What about the sense of accountability, respect, adherence to faith, protection of the innocent and being true examples of Christ’s presence in the world? I witnessed as these men who wore a traditional black suit with white “Roman” collar, undeniably the most recognizable symbol of the Catholic priesthood, were frequently sought out, pampered, given unlimited trust and attention, and had people constantly offering to do things for them. Internally, I questioned some priests I saw take the spiritual “gift” of priesthood and turn it into something they bartered with, a way to control parishioners, as saying “If you treat me special, I will pray and give you blessing from our Lord.”

Hank’s book, UnHoly Communion-Lessons Learned from Life among Pedophiles, Predators, and Priests is a must read for anyone interested in knowing the truth about life in the Catholic Church. His thoughtful and reflective presentation is not about grinding an ax, although he has every right to do so. It’s all about being honest, primarily with himself, then with his family, his religious community, and us. Because it is precisely this honesty that will help him, them and us from shirking our responsibility to be more vigilant in terms of protecting the most vulnerable among us.

Thank you, Hank, for your witness. And thank you for calling us to uncover our eyes and see things, not as we would like them to be, but as they really are.