A Rancho Cucamonga man who taught 17 years at a Catholic high school was fired from his job days after he married his gay partner in a San Bernardino civil ceremony. 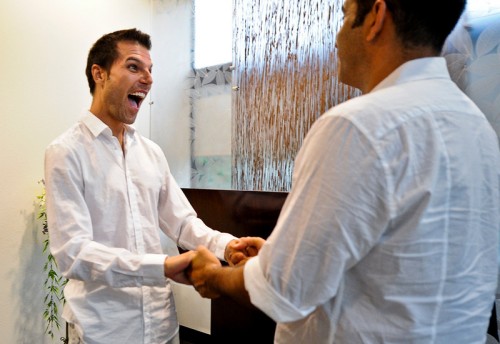 While school representatives declined comment on the matter, an attorney representing 45-year-old Ken Bencomo says he was fired because of the same-sex ceremony.

“The reason given was that the marriage occurred and the school’s position was that it violated church teachings,” said Chatsworth attorney Patrick McGarrigle.

Bencomo, 45, was head of the English department at St. Lucy’s Priory High School in Glendora, but also worked as a yearbook moderator and dance coach.

Students say they were aware of Bencomo’s sexual orientation.

“He never talked about his personal life to his students, but it’s something that students and faculty knew,” said former student, Abigail O’Brien, 19, of Upland.

McGarrigle also said the school was aware long before he got married.

“St. Lucy’s has known of Mr. Bencomo’s orientation for years,” she said. “Administrators had been introduced to his partner in the past, so the suggestion that Ken’s orientation is a surprise or that his lifestyle somehow violated doctrine is at odds with the school’s knowledge and what seemed to be acceptance of him until most recently.”

In an online petition protesting Bencomo’s termination, supporters of the former teacher say a July 2 article in the Daily Bulletin prompted the school to dismiss him. Bencomo
and his husband, Christopher Persky, 32, of Rancho Cucamonga were one of the first gay couples to line up at the San Bernardino County Assessor-Recorder’s Office to get married July 1 following a Supreme Court decision allowing same-sex marriage.

He appeared in photographs and video for the story.

St. Lucy’s officials later issued a written statement, saying the school plans to continue educating students “in the tradition of the Catholic faith.”

“As a Benedictine school, St. Lucy’s is a community for those who wish to express Christian values in education and develop person and academic excellence,” the statement said.

Stark said an attorney representing Bencomo contacted the school on Sunday, but declined to elaborate.

“I have yet to see what his allegations are, so I can’t comment,” he said.

While about 2,000 people had signed the petition by Wednesday and more than 1,300 had joined a Facebook discussion group about Bencomo, not everyone felt the school’s decision was wrong.

James Wellman, a former board and executive committee member for the school, said he thought Bencomo might still be teaching at St. Lucy’s had he not appeared in the newspaper.

“We should not forget that Ken has been teaching at a Catholic high school. Anyone who believes that St. Lucy’s operates in a totally independent fashion from the Catholic Church is gravely mistaken,” he said.

The Diocese of San Bernardino said its Catholic schools prohibit discrimination against teachers or other school employees based on their lifestyle choices.

“However, if a teacher or school employee makes a public display of behavior that is counter to church teaching – such as homosexuality, sex outside of marriage, having a child outside of marriage – that can impact their employment status,” said John Andrews, diocese spokesman.

School policies outlined by the Archdiocese of Los Angeles say a staff member can be counseled or disciplined if he or she engages in “behavior counter to the moral teachings and standards of the church.”

“I am joined by many students and alumni in saying that we believe this is a fight for love and equality, and as such we wish to display love and kindness, even while feeling hurt and shock,” the Beverly Hills woman said.

McGarrigle said Bencomo is hoping to resolve issues with the school without pursuing legal action.