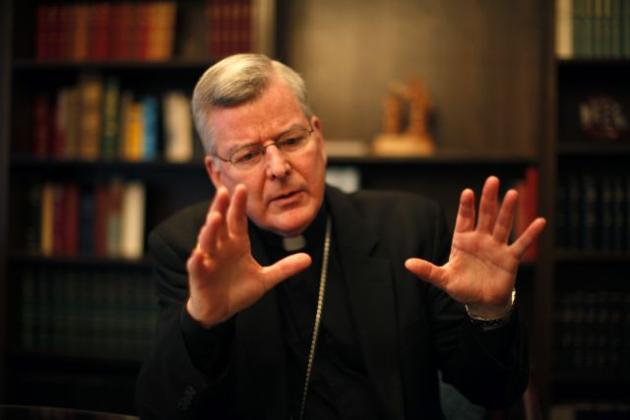 Former Minneapolis-St. Paul Archbishop John Nienstedt, shown in 2015, drew concern over his interactions with seminarians during his time in St. Paul, according to recently released documents.

The Ramsey County attorney’s office released the final mountain of documents from its criminal investigation into the Archdiocese of St. Paul and Minneapolis this week, providing new details of allegations of sexual advances by former Archbishop John Nienstedt and of the church’s mishandling of convicted sex offender Curtis Wehmeyer.

Nienstedt’s interactions with seminarians drew concern from young men and clergy leaders more recently than had been revealed before, including during his seven-year tenure in St. Paul ending in 2015, according to files. That’s in addition to the previously reported allegations of sexual improprieties with adult men made by former colleagues in the Detroit area dating to the 1970s.

Documents show that former Archbishop Harry Flynn — like Nienstedt — gave special attention to Wehmeyer, a former priest, including overriding a 1996 recommendation by the archdiocese’s vocation office that Wehmeyer not be admitted into seminary.

By 2013, and after multiple episodes of sexual misconduct, Wehmeyer was convicted of sexually abusing two boys in Wehmeyer’s camper when it was parked outside his St. Paul church. He was sentenced to five years in prison.

Documents also indicate that Wehmeyer used that camper to visit the lake home of Joseph Kueppers, the archdiocese’s chancellor for civil affairs, where Wehmeyer would spend some weekends from about 2007 to 2012. According to a deacon with a lake home nearby, Wehmeyer sometimes performed Sunday masses at the lake home. Kueppers, a former parishioner of Wehmeyer, was noted for “not disclosing information” by attorneys investigating Nienstedt.

The wide-ranging documents — edited for confidentiality — represent the final pieces of the investigation completed by Ramsey County Attorney John Choi this year. Choi had filed a criminal lawsuit against the archdiocese, charging it with failure to protect children in the Wehmeyer case. The charges were dropped in July in an agreement requiring the archdiocese to publicly admit its guilt and follow new procedures in dealing with abuse.<

The nearly 1,000 pages of documents were released in response to a freedom of information request filed by the Star Tribune.

The county looked into whether Nienstedt or the archdiocese gave preferential treatment to Wehmeyer over the years. The question arose because Wehmeyer had so many red flags — including soliciting sex in a bookstore, using boys’ bathroom in a parish school, apparent cruising for sex in a park and angry outbursts.

A team from Kinsale Management Consulting that was asked to review the personnel files leading up to Wehmeyer’s sex abuse charges concluded, “If he hasn’t offended already, he’s going to,” according to a St. Paul police investigator.

The files include archdiocese correspondence, interviews with archdiocese officials involved in clergy misconduct issues, statements filed in the Nienstedt investigation, and interviews by county attorney investigators. They follow a batch of court files released by Choi in July.

The documents indicate new allegations against Nienstedt. A former seminarian at St. Paul Seminary told investigators that before a group photo with Nienstedt at a 2010 event at the new Twins stadium, Nienstedt put his arm around him and “caressed my neck and back in a manner that was very uncomfortable to me.”

A former St. Paul priest reported he left the priesthood about 10 years ago because of a friendship with Nienstedt that became uncomfortable, and that the former archbishop seems to have derailed his attempt to become a priest again in another diocese.

Likewise, a seminarian from Nienstedt’s days in Michigan, who claimed he also rebuffed a Nienstedt advance, said he believes the former archbishop tried to undermine his career because he didn’t want to work in the same place as Nienstedt.

“There are troubling patterns suggested by the evidence thus far: alleged unwelcome advances, inappropriate interaction with seminarians, and reprisals among those that don’t reciprocate those advances,” wrote an archdiocese official in a 2015 memo to archdiocese leadership.

He notes that some archdiocese staff have noted “odd letters written to seminarians … in which warm and affectionate language is used.”

Nienstedt has repeatedly stated he has not engaged in sexual misconduct, and blamed some of the reports on the tough stance he has taken on gay marriage.

“I am a heterosexual man who has been celibate my entire life,” Nienstedt wrote in July. “I have never solicited sex, improperly touched anyone and have not used my authority to cover up, or even try to cover up, any allegation of sexual abuse.”

Rev. Kevin McDonough, the archdiocese’s longtime point person on clergy abuse, is discussed in some files. A consultant working at St. Peter Claver Church in St. Paul, which McDonough also served, recalled the priest there saying, “I have to get someone out of town quickly.”

Another St. Peter Claver consultant said that McDonough did not use his own computer for much or most of his work, but rather used his assistant’s. And McDonough refused to let the consultant recycle and reuse church computers.

In a 2013 letter to members of St. Peter and Incarnation Church, which he also oversaw, McDonough attacked abuse victims’ request for the archdiocese to make public the list of priests accused of sexually abusing minors. “This is a content-less issue,” he wrote, as many of the people on the list haven’t been criminally charged but didn’t have a chance to defend themselves. “Nothing in this issue, I believe, has any direct personal relation to me.”

The St. Paul police files include an interview with Wehmeyer speaking from prison to police investigators. The former priest attributed his egregious behavior to excessive drinking and to coping with his own personal issues, adding “I’ve got a lot to deal with.”