The brilliant Charlie Pierce takes down the Cardinals.

Are these idiots kidding me? The Letter From Birmingham Jail?

May god forgive them for such towering, impious self-regard, because I have no intention of doing so. 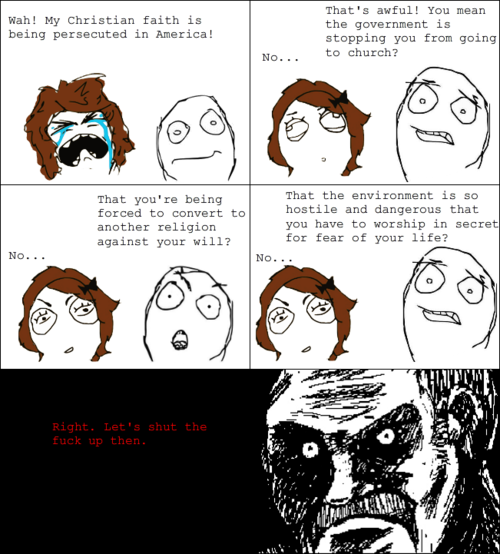 The Clan of the Red Beanie went celibate balls to the wailing wall on Thursday, issuing a Statement on Religious Liberty that turns the English language inside-out, repositions religious repression and pious bigotry as statements of freedom, makes a mockery of the informed consciences of a good slice of the American Catholic laity, and is a statement of meddling in the secular government that would be almost tragic, if it didn’t drip so garishly with lachrymose sanctimony about how heavily these ermined layabouts have been oppressed by the provisions of the Affordable Care Act, and by the fact that some states have decided that, no, they can no longer function as tax-free havens for discrimination on the basis of who does what to whom with their sexyparts. But, before we get to that, we have to deal with one representative passage which makes me wonder what exactly some of these guys were burning in the thurible during the Holy Week services:

In his famous “Letter from Birmingham Jail” in 1963, Rev. Martin Luther King Jr. boldly said, “The goal of America is freedom.” As a Christian pastor, he argued that to call America to the full measure of that freedom was the specific contribution Christians are obliged to make. He rooted his legal and constitutional arguments about justice in the long Christian tradition:

Holy Jesus H. Christ on the 5:15 to Galilee, this takes some big clanking brass ones. In 1963, Martin Luther King was in the Birmingham jail because he was fighting to bring down the infrastructure of American apartheid. The odds weren’t much better than 2-1 that he would get out of that jail alive. This is certainly analogous to people padding through the carpeted halls of chancery buildings trying to find a way around the country’s anti-discrimination statutes so that the Presbyterian janitors in their hospitals would be forced to live under the same theologically inept regime that American Catholics have been ignoring for almost 50 years. Sitting in a cell, wondering if every turn of the key in the lock was the last one, is certainly exactly the same moral witness as sitting in your office, worrying your pectoral cross down to the nub because somewhere, somebody is having sex that may not “be open to the transmission of life.”

Moreover, King was in the jail because, as part of his belief in non-violent protest, he had to be there. One of the essential elements of his strategy was to break the secular law and to accept the secular punishment. Now, I don’t think I have to explain in too much detail how, over the last five decades or so, accepting the secular punishment for breaking the secular law never has been high on the priority list for America’s Catholic bishops. Don’t believe me? Take it up with Bernard Cardinal Law there, who ran off to Rome to preside over the Basilica Of Our Lady Of The Clean Getaway….

To be sure, history shows that the Catholic hierarchy has yet to learn its lesson when dealing with pedophile priests. When the problem hit Boston in 1992 — after Massachusetts priest James Porter was convicted of molesting 28 children in three Bristol parishes in the 1960s — scrutiny of the Church grew so intense that Law infamously called down “God’s power on the media.” But despite the negative headlines, the cardinal, we now know, did little to rid his archdiocese of sexual predators and thus prevent further public-relations fiascoes. When the Diocese of Dallas fell to its knees in 1997 — after a jury awarded 11 clergy sex-abuse victims $119.6 million for its negligent supervision – American bishops lamented that the award would cripple the American Catholic Church. But despite the financial threat, the bishops, we now know, did little to set up a system-wide policy to root out abusive clergy.

Oh, make no mistake about it, these guys know how to play the religious freedom card when it suits their purposes. In this case, it was to duck responsibility for the heinous crimes they covered up. Now, it’s to pretend to be oppressed because their insurance carriers might be required by law to do something of which the bishops don’t approve. And the performance is becoming positively operatic. The statement also mentions that the pope is worried about us, too.

This has been noticed both near and far. Pope Benedict XVI recently spoke about his worry that religious liberty in the United States is being weakened. He called it the “most cherished of American freedoms” — and indeed it is. All the more reason to heed the warning of the Holy Father, a friend of America and an ally in the defense of freedom, in his recent address to American bishops:

Of particular concern are certain attempts being made to limit that most cherished of American freedoms, the freedom of religion. Many of you have pointed out that concerted efforts have been made to deny the right of conscientious objection on the part of Catholic individuals and institutions with regard to cooperation in intrinsically evil practices. Others have spoken to me of a worrying tendency to reduce religious freedom to mere freedom of worship without guarantees of respect for freedom of conscience.

Here once more we see the need for an engaged, articulate and well-formed Catholic laity endowed with a strong critical sense vis-à-vis the dominant culture and with the courage to counter a reductive secularism which would delegitimize the Church’s participation in public debate about the issues which are determining the future of American society.

Funny, we didn’t hear much about the need for an “engaged, articulate and well-formed Catholic laity” when the topic was the raping of children, and the international conspiracy to obstruct justice that covered it up. In fact, the more engaged, articulate and well-formed the laity became on the topic, the more howls we heard from the hierarchy — and from the sheep who follow it blindly — that even to bring up these crimes, let alone demand that the criminals be prosecuted, was to attack the Church itself. That is still going on, here and elsewhere.

I bring up the scandal because it is not yet over. Because it is not yet over, the hierarchical Church in America has no serious moral witness that any Catholic with an informed conscience need pay any mind. When you finally settle accounts with the children who were raped, all of them, everywhere, then you may request, gently, that we listen to you about why your insurance companies shouldn’t offer birth control without co-pays because that is religious oppression on a par with hanging Quakers.

(Their history’s pretty bad, too. They drag in poor Jemmy Madison: James Madison, often called the Father of the Constitution, described conscience as “the most sacred of all property. He wrote that “the Religion then of every man must be left to the conviction and conscience of every man; and it is the right of every man to exercise it as these may dictate.” This, of course, is an argument for religious exemptions from the secular law derived from the thoughts of a man who didn’t even want there to be congressional chaplains.)

Catholic foster care and adoption services. Boston, San Francisco, the District of Columbia, and the state of Illinois have driven local Catholic Charities out of the business of providing adoption or foster care services — by revoking their licenses, by ending their government contracts, or both — because those Charities refused to place children with same-sex couples or unmarried opposite-sex couples who cohabit.

…they are giving away the entire game. Nobody has a right to a government contract under the First Amendment. If secular governments want to give religious institutions waivers from the anti-discrimination statutes, that’s the decision for the secular governments to make. They are under no constitutional requirement to do so. And, again…

Discrimination against Catholic humanitarian services. Notwithstanding years of excellent performance by the United States Conference of Catholic Bishops’ Migration and Refugee Services in administering contract services for victims of human trafficking, the federal government changed its contract specifications to require us to provide or refer for contraceptive and abortion services in violation of Catholic teaching.

This may well be unfortunate. It may even be a very bad policy decision. But it is not an infringement on anyone’s religious liberty. Apparently, the bishops have decided that referring people for contraceptive and abortion services is something that they cannot in good conscience do. So they have stopped providing this service. Nobody is making them do anything they don’t want to do. In this argument, they are defining religious liberty merely as carving out exceptions within the secular law so they can have their cake and eat it, too. It is using an important principle as nothing more than a picklock and, in doing so, they claim that their ability to discriminate has been truncated so, therefore, they are the victims of discrimination. Yes, and white people are the true victims of racism in America. They should be embarrassed.

And, then, the little tin trumpets sound.

What is at stake is whether America will continue to have a free, creative, and robust civil society-or whether the state alone will determine who gets to contribute to the common good, and how they get to do it. Religious believers are part of American civil society, which includes neighbors helping each other, community associations, fraternal service clubs, sports leagues, and youth groups. All these Americans make their contribution to our common life, and they do not need the permission of the government to do so. Restrictions on religious liberty are an attack on civil society and the American genius for voluntary associations.