File under:  Nice goin’ Francis!  You talk a good line, but when push comes to shove, you’re just like your predecessor.  SHAME!

Melbourne priest Greg Reynolds has not only been defrocked, but also excommunicated by the Catholic Church over his support for women priests and homosexuals. The order came directly from Vatican under the authority of Pope Francis, who just recently said that the Church focuses too much on gays and abortion. 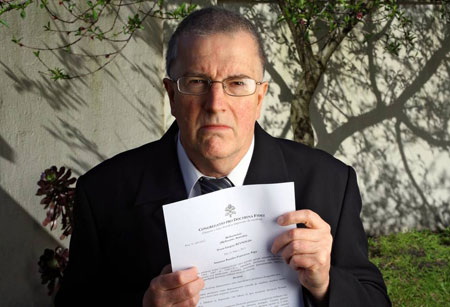 Mr Reynolds resigned as a parish priest in 2011, and has founded Inclusive Catholics in 2012. He said that although he was expecting to be laicised or defrocked for his views on ordination of women and homosexuality, he didn’t know he was to be excommunicated as well.

Excommunication is a form of medicinal penalty for members of the Catholic Church. Those who are excommunicated are barred from receiving the Eucharist and other Sacraments of the church.

“In times past excommunication was a huge thing, but today the hierarchy have lost such truth and respect,” he was quoted by The Age as saying.

“I’ve come to this position because I’ve followed my conscience on women’s ordination and gay marriage.

The order, written in Latin, came from Vatican through the authority of Pope Francis, and gave no reason for the former priest’s excommunication.

The letter was dated May 31, months before the Pope told his subjects to go easy on how they deal with gays, abortion, and contraception. Mr Reynolds continued to The Age that he wants the same thing as the Pope, adding that he believes that the Church is in need of reform and renewal.

“My motivation is trying to encourage reform and clear need for renewal in the church,” he said. “I still love the church and am committed to it, I’m just trying to bring about in my own little way to help highlight some of the failing and limitations.”

Melbourne Archbishop Denis Hart, who made headlines in May after appearing at a Victorian parliamentary inquiry into a child sex abuse case of another priest, apparently was not the one who requested the order, “but someone else unknown has gone over his head and contacted the Congregation of the Doctrine of the Faith,” Mr Reynolds said.

Archbishop Hart explained that Mr Reynolds was excommunicated because he continued to celebrate the Eucharist publicly after his priestly faculties were withdrawn. He was also preaching contrary to the teachings of the church.

As per its official Web site, Inclusive Catholics is an evolving movement/community in Melbourne that has recognises the hierarchical nature of the Catholic Church, but opposes its views on homosexuality and the ordination of women.

Mr Reynolds said that his being excommunicated would not make a different to his ministry.

He was offered $5000 as a payout for his 32 years of service in the church when he resigned, though he claimed he should have received $48,000 as the usual payout figure is about $1500 per year.